This past year was a year of exciting change, of growth and of many blessings. Looking back, we are humbled by all that God did during the year.

During 2013, by the grace of God, Motel Church locations continued to expand. We launch new motel churches by serving on a monthly or bi-weekly basis and then meet more frequently until we’re finally meeting weekly. This past year the number of motels where we met weekly doubled from the previous year.

During the year we gave out hundreds of Bibles in English and Spanish and over 70 Adventure Bibles for teens.

The hopeless are finding hope, strangers are becoming caring neighbors, and life is taking on new meaning for people who have not felt that anyone cared about them for a long time. Every week through the year we celebrated as an average of one person made a decision for Christ at each motel church and another person recommitted their life to the Lord. That means that during the month of December – 32 people accepted Christ at a motel church and an additional 32 turned their lives back over to Jesus. Motel pools were the scene of 30 people being baptized during the year.

Ordinary people serving in Motel Church are standing in the gap for lives. A small group was serving at one motel when a single dad and his ten year old son attended the service. God spoke and that dad heard a message of hope and encouragement. He later told a member of the small group that after hearing the message he had changed his plan to commit suicide the very next day.

People who would never walk into a church are being changed through the persistent love of volunteers who show up to do church with them, right where they live. A burly biker who once proclaimed, “I’ll never set foot in any church!” now sits through the entire message with his wife at a motel church and even yells up at noisy people in the motel, “Hey, be quiet, we’re doing church down here!”

As the number of motel churches has grown, God has similarly expanded the leadership. 12 leaders attended our first leadership meeting in March, by mid-year there were 24 leaders, and at the September leadership meeting 45 were in attendance. We trained eight new on-site leaders during the year, two new core leadership teams were formed and a new board of advisors was assembled.

Hope comes to people in motels in many ways. In March, one couple was married in one of several weddings at Motel Church. This couple had been together for 20 years and have two teenage daughters. Before the wedding, every Sunday this couple faithfully took the bus from the homeless shelter where they lived to their motel church so they could serve. After the wedding the husband landed a job and the family was able to move out of the homeless shelter.

We continue to forge relationships with individuals and organizations that care about the transitional homeless and working poor. We recently finalized an agreement with Chaplains College that will provide an 18 month AA degree seminary course to all Motel Church leaders and prospective leaders as part of our vision to equip leaders in each motel church. This course will be made available at no charge in both classroom and online formats.

As part of our vision, we remain totally dependent on God, trying many new ideas and continuing those that God blesses. Last year we shared what we have learned with groups forming in other areas. A team in San Diego is now starting Motel Church services in La Mesa. Teams are also coming together in LA county, San Bernardino county, Riverside county and the San Fernando Valley area of California. Additionally five other states and one other country have all contacted us for information on starting a Motel Church movement in their areas. To help this, we created a comprehensive process manual online that allows anyone to easily follow the steps we have seen God bless.

Motel church services reach more than motel residents. A homeless teenage couple walks from the bridge under which they live to a motel several blocks away for church every Sunday. They are on drugs and sometimes disruptive but they are loved and fed and cared for by the motel church family. They cling to each other for support but call the leaders at the motel church their parents and grandparents. God is working on them.

We use holidays as outreach opportunities, expanding the awareness of motel church within existing motels and taking the motel church experience into motels we aren’t yet serving. During outreach events this past year we were able to reach our neighbors living in a total of 16 Southern California motels in five cities.

On Easter we provided a delicious brunch for 500 residents of area motels. Easter Sunday at Motel Church was complete with Easter Egg hunts that included lots of great candy and prizes – including brand new Pillow Pets, new backpacks, Adventure Bibles, new shoes and lots of toys. Here are two reports from volunteers at Orange County motels:

“…the meal and our Easter service were both a huge success.  We fed over 125 people.  Our meal was definitely 5-Star including spiral glazed ham, yummy potatoes, green beans, rolls and bread with butter, plenty of drinks, and desserts including freshly baked apple pie (how we stretched the pie to feed over 100 people was Gods doing).”

“After 35 minutes we thought we cooked way too much food. We had four hams, tons of scalloped potatoes, rolls, extra green bean casseroles, corn, jello salads and desserts. However, people kept coming and coming and coming! We had just enough food for the last person. Nothing was wasted. It was a faith builder for both groups to see that God knew exactly how much food was needed. The kids thoroughly enjoyed the Easter egg hunt and most of the donated clothes and shoes were handed out. It was a team effort by all and all performed admirably serving the Lord.”

For back-to-school in August we gave out 125 new backpacks complete with school supplies for kids attending school while living among seven motels.

Thanksgiving was our biggest outreach ever. Nearly 400 volunteers served a traditional Thanksgiving meal to 1,300 people in locations around Southern California. Thanksgiving 2013 was also the most well-organized outreach yet. For the first time our entire planning process was documented online in order to provide a “how-to” manual for future events and to share with other areas.

Here’s some feedback from one volunteer leader:

“One volunteer group was a family of 12. They brought grandma and grandpa, brothers and sisters-in-laws, several of their children (mostly 10-14 years of age). Praise God for the kids who came! They made friendship bracelets and goody bags that they shared with the children at the motel. They also brought a couple of games – when the kids were finished with their meal, they spread out on one of our tables and played games together!!! Our guest kiddos were SO HAPPY to be sharing fun time with these kids who volunteered! The happiness on their faces was priceless. My heart was overflowing with JOY from the abundance of love and sharing this whole family brought to our ministry!!!”

At Christmas-time toys and other gifts were given to hundreds of children and families living in Orange County motels. 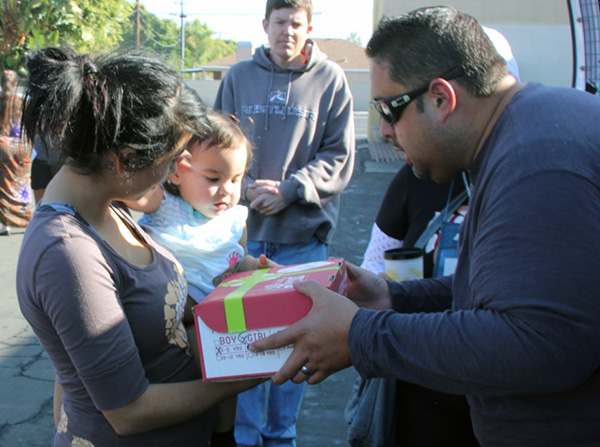 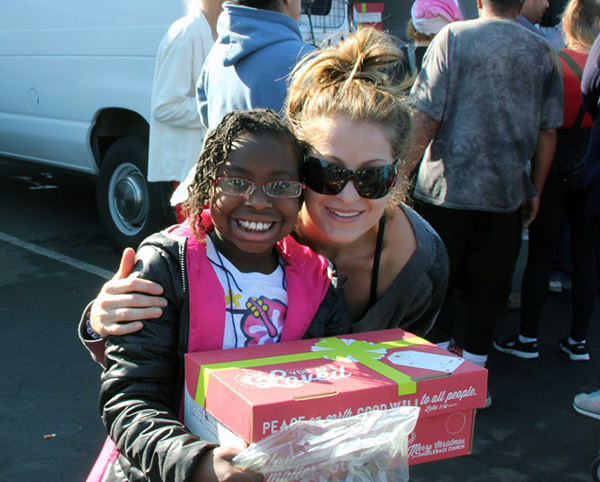 The joy of Christmas is seen through the beaming smiles of Maria and RJ when they were presented with bicycles on Christmas Eve. 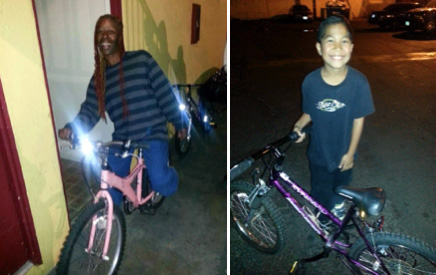 As you can see, this year was amazing. God’s bounty and blessings were evident in every aspect of the Motel Church movement. All honor and glory goes to God who is the source of every blessing we witnessed. We are grateful and humbled by the privilege of serving a great God that loves everyone without limits and unconditionally.

We thank Him for touching every heart that shared the love of Christ or received it as a result of Motel Church this year.